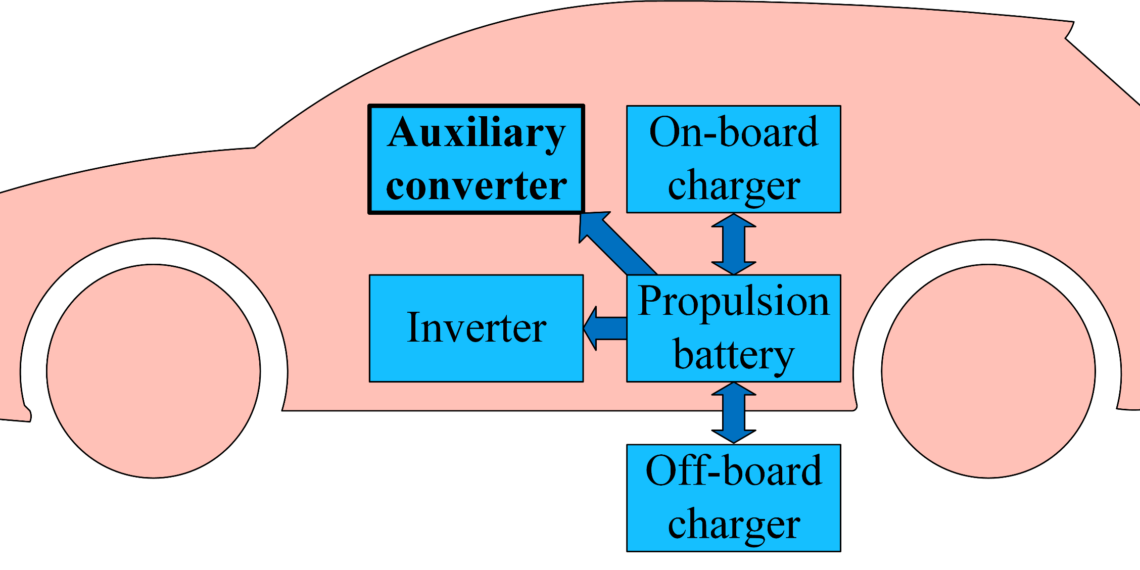 The rapid advancement of wide bandgap power transistor technology has facilitated comprehensive R&D efforts in academia and industry to assess the impact of GaN devices for power electronic converters. Research is being carried out on converter topologies that can exploit the unique device characteristics of GaN transistors to get better performance in addition to volume and loss reduction. One such research project by our team, led by Prof. Sandeep Anand from the department of electrical engineering, utilized the distinctive reverse conduction characteristics of GaN transistors to improve the performance of power electronic converters. This improvement reduces the cross-regulation while ensuring a small size and high efficiency of the auxiliary power supply for E-mobility applications.

The four major power electronic converters in an electric vehicle are the off-board charger, on-board charger, inverter, and the auxiliary power supply, as shown in Fig. 2. Among these converters, the auxiliary power supply is used to provide power to the vehicle’s various subsystems, such as communication, control, sensors, and protection circuits. Different levels of voltages are required to power these individual subsystems. Isolation between the output voltages and the input supply is another key necessity. The multiple output flyback converters (MOFC) topology is used widely as the auxiliary power supply in low-power applications because of its simplicity, fewer components, and overall cost-effectiveness.

Cross-regulation between different outputs is an important requirement in conventional MOFCs. It is defined as the deviation of an output voltage due to a load disturbance on another output. Note that it is different from load regulation, which is the deviation of an output voltage due to the load disturbance in the same output. The voltage deviation due to cross-regulation can be upwards of 5% in a worst-case condition, which is unacceptable since a regulated DC voltage is desirable in most applications. Conventional methods of improving cross-regulation achieve better performance at either the cost of system efficiency, power density, or both.

Use of GaN characteristics to achieve better regulation

To solve the cross-regulation problem of MOFCs, the team came up with an innovative technique where the gate-dependent reverse conduction characteristics of enhancement-mode GaN transistors are utilized. In a nutshell, the GaN transistor can block a certain amount of voltage in the reverse direction when it is turned OFF with a negative gate voltage, as observed from the I-V characteristics shown in Fig. 3. This property is utilized in the MOFC, where all active switches are GaN transistors. For example, in the case of a two-output flyback converter (shown in Fig 4), while the primary switch is driven with a unipolar gate driver, bipolar gate drivers are used to turn ON the secondary and tertiary switches during two distinct intervals. Due to the use of negative turn OFF voltages, the secondary and tertiary windings conduct current in two distinct intervals. These two intervals, and consequently, the flow of current to each of the output capacitors is controlled using two PI controllers to independently regulate each output voltage, as shown in Fig 4. 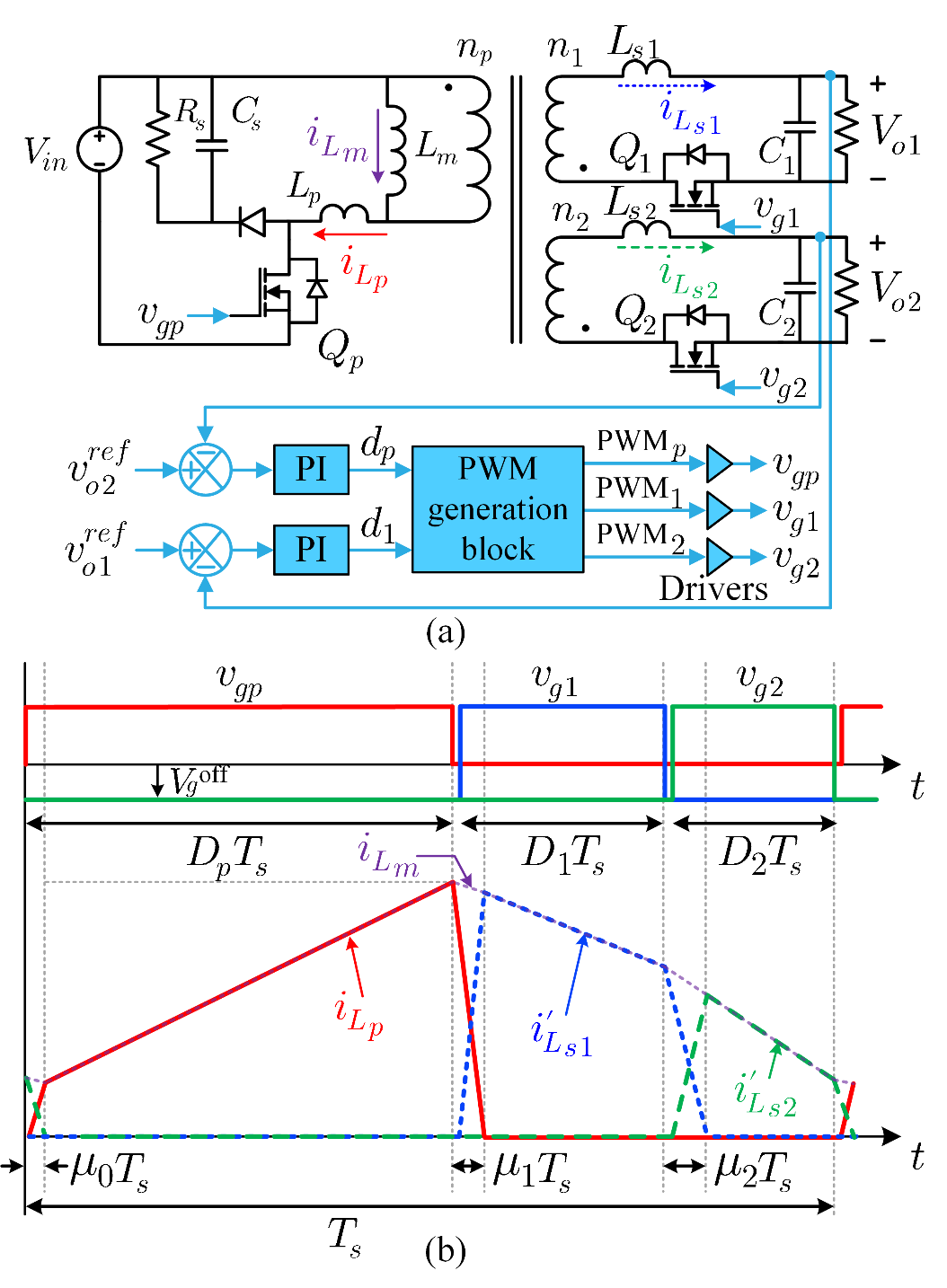 The operating principle of the developed technique is explained with an example of a two-output flyback converter as follows. Referring to Fig. 4 (a), the primary switch (Qp) is turned ON, and the primary winding conducts similarly to a conventional flyback converter. When Qp turns OFF, the secondary switch Q1 is turned ON. At the same time, the tertiary switch (Q2) is kept OFF with a negative gate bias. Current only builds up through Q1 in the secondary winding because Q2 is in reverse blocking mode, and it blocks the flow of current in the tertiary winding. After a particular duration, Q1 is turned OFF with a negative gate bias, and Q2 is turned ON. In this case, the leakage inductance current continues flowing through Q1 in reverse conduction while Q2 also starts conducting. Once the leakage inductance current reduces to zero, Q1 enters reverse blocking mode. After the conduction of Q2, Qp turns ON again. Fig. 4 (b) shows the representative transformer winding currents of the converter during the above stages of operations at a steady state. The output voltages of the converter are tightly regulated by controlling the duration for which each of the output winding conducts. 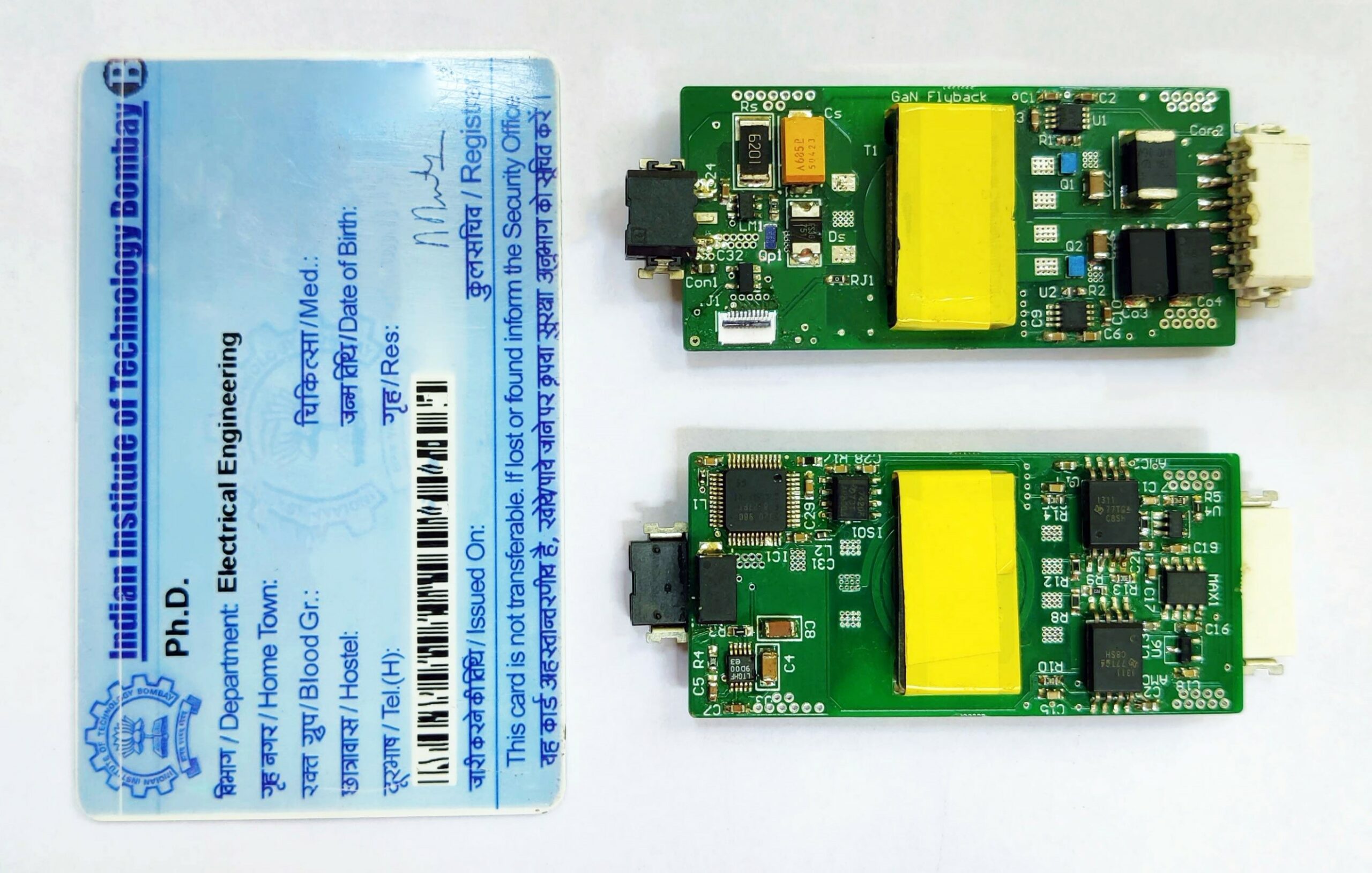 The team developed an experimental prototype of the two-output flyback converter to validate the proposed idea. The top and bottom views of the converter and its compact size are demonstrated in Fig 5. The power density of the prototype is 51 W/in3. The team did multiple stages of the prototype development, namely the printed circuit board schematic and layout, component soldering, and experimental testing, in the laboratories available in the Department of Electrical Engineering. The magnetics was integrated into the main board using the planar transformer technology, where copper traces on the board are used as the transformer windings. 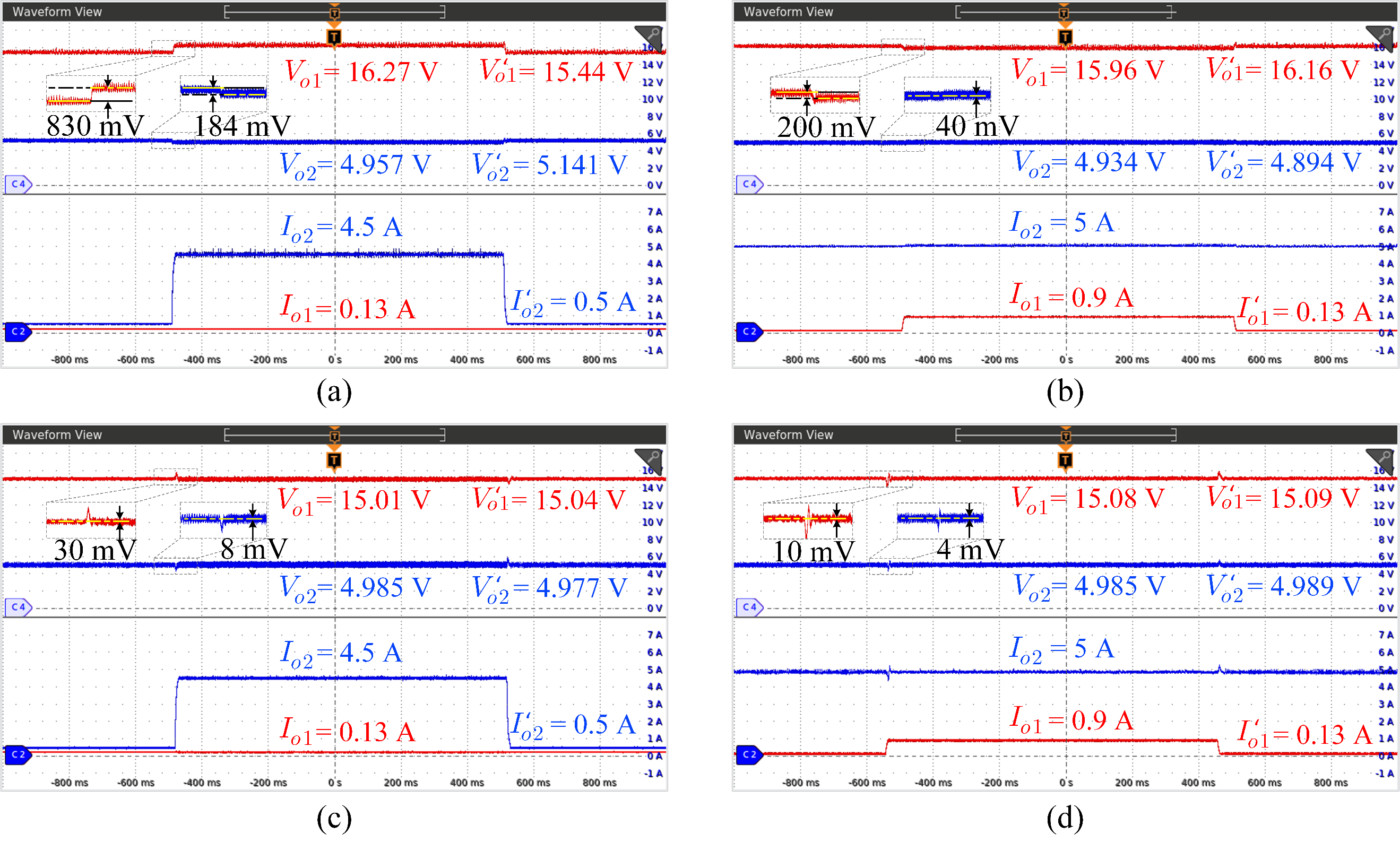 Based on the above result, the MOFC with the proposed scheme has potential in isolated output voltage applications where tight voltage regulation is required, such as the auxiliary power supply for E-mobility.

Arnab Sarkar (Ph.D. student in the Department of Electrical Engineering) also presented this work in the IEEE Industrial Electronics Society (IES) Student and Young Professional Competition 2021 and was awarded the third prize of $500. The team is also working on various other aspects of WBG-based power electronics for E-mobility applications.